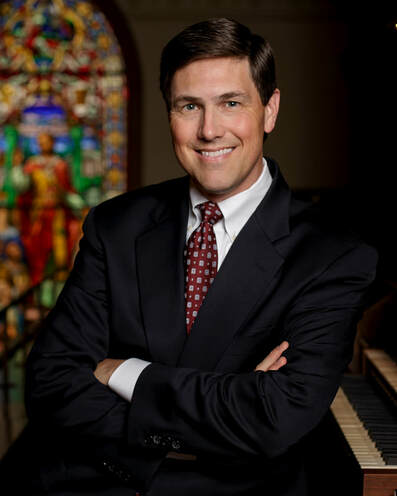 Jack Mitchener is Professor of Organ, University Organist, Chairman of the Keyboard Department and Director of the Townsend-McAfee Institute of Church Music in the Townsend School of Music at Mercer University.  In addition, he is Organist and Artist-in-Residence at St. Philip's in Atlanta.

He is recognized as one of the leading concert organists and teachers in his generation.  He has been praised for playing that is technically brilliant, yet expressive and poetic.  According to The American Organist, “Mitchener brings music to life with his supple rhythmic control, clear phrasing, energy, and sensitivity.”  In response to his recording on the historic Salem Tannenberg organ, Dulcet Tones, a reviewer for the International Record Review of London asserted:  “Superb…an impressive and rather moving listening experience.”  He was invited to participate as a performer for the 2016 Eastman Rochester Organ Initiative in Rochester, NY and garnered this review: “Mitchener’s masterful playing and sensitivity to both congregation and instrument was the high point of the conference,” The Diapason.

Dr. Mitchener has concertized extensively throughout the USA, Europe, and Asia, and many of his performances have been heard in television and radio broadcasts such as American Public Media's Pipe Dreams hosted by Michael Barone. He has performed in notable venues such as the Church of St. Sulpice and the Cathedral of Notre Dame in Paris; St. Thomas Church, New York City; Duke University Chapel; the Church of St. Augustine (Augustinerkirche) in Vienna; the Church of St. James (Jacobikirche) in Lubeck, Germany; and the Hong Kong Cultural Centre. He also has collaborated with renowned musicians such as Nick Eanet (Concertmaster of the Metropolitan Opera Orchestra), the Mendelssohn and Ying String Quartets, lutenist Paul O'Dette, and composer John Corigliano. While still an undergraduate student, he was the national winner of the Music Teachers National Association Organ Competition. Later he was a laureate in the Philadelphia AGO and Dublin International organ competitions. He records for the Raven and Albany labels.

He has performed the complete organ works of J. S. Bach in a series of fifteen recitals and also has given recitals, lectures, and master classes for national and regional conventions of the American Guild of Organists, the Organ Historical Society, the Music Teachers National Association, the Historical Keyboard Society in North America, the Society for Seventeenth-Century Music, the Hymn Society in the United States and Canada, the Association of Anglican Musicians, the Fellowship of United Methodist Musicians, and the Presbyterian Association of Musicians. He has been a guest performer and teacher at numerous universities throughout the USA as well as institutions in Hong Kong and Japan. He also has premiered works by Emma Lou Diemer, Dan Locklair, Margaret Vardell Sandresky, and Robert Ward (winner of the Pulitzer Prize).

His major teachers include Marie-Claire Alain, David Craighead, David Higgs, John Mueller, and Russell Saunders (organ); Gerre Hancock (improvisation); James Cobb, Louise Leach, Kimberly Kabala, and Clifton Matthews (piano); and Arthur Haas and Huguette Dreyfus (harpsichord). He holds the Doctor of Musical Arts, two master's degrees, and two Performer’s Certificates in organ and harpsichord from The Eastman School of Music, University of Rochester. During his studies at the Conservatoire National de Rueil-Malmaison, France, he was unanimously awarded the Médaille d'or (Gold Medal), Prix d'Excellence, and Prix de Virtuosité. His high school diploma and bachelor's degree are from the University of North Carolina School of the Arts.

A former professor at the Oberlin Conservatory of Music, he has also served on the faculties of the University of North Carolina School of the Arts, Salem College, The Eastman School of Music (Community Education Division) and the Colgate Rochester Crozer Divinity School. Since 2012 Dr. Mitchener has served as Director of the Townsend-McAfee Institute of Church Music, University Organist and Professor of Organ in the Townsend School of Music at Mercer University in Macon, Georgia.   He was recently appointed Organist and Artist-in-Residence at the Episcopal Cathedral of St. Philip in Atlanta.

For the American Guild of Organists, Jack Mitchener has been a chapter dean and board member and also a member of the National Committee on Professional Education. In this capacity, he helped to plan and execute national pedagogy conferences for the AGO including one held at the Institute of Sacred Music at Yale University. He also has served as an adjudicator for numerous competitions including those on the national level for the AGO as well as the Biarritz International Competition in France. He is a former President of the Board of Trustees of the Moravian Music Foundation, is a member of the Pi Kappa Lambda National Music Honor Society, and has been cited in numerous Who’s Who publications. He is represented by Penny Lorenz Artist Management of Seattle, Washington. For more information about recordings and future performances, visit www.jackmitchener.com.